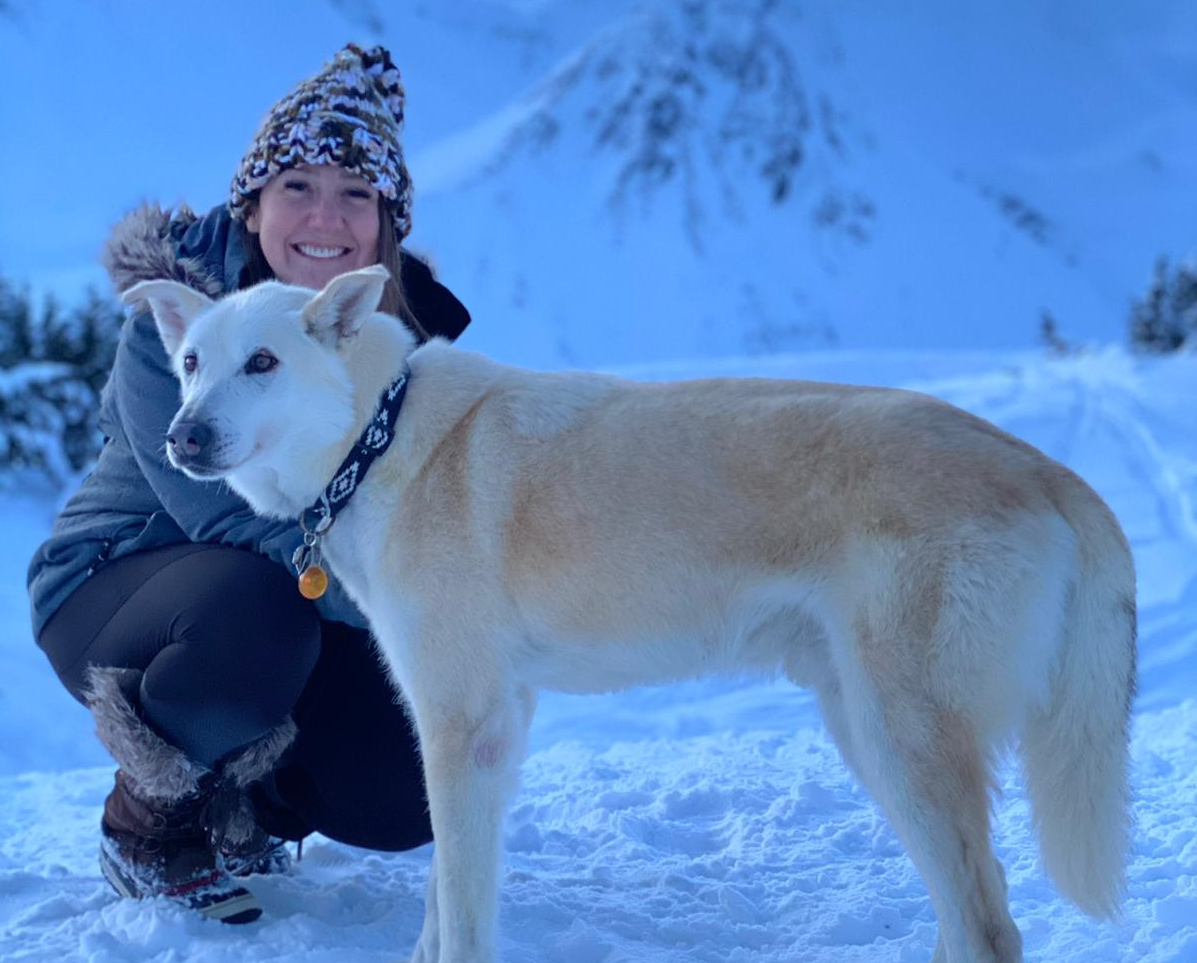 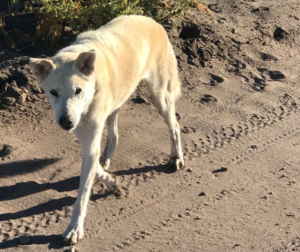 We were on our way to the spay and neuter clinic in El Centenario (just outside of the town of La Paz) when we first saw him. This white Husky mix was walking slowly down the road from the Parisio de Mar golf course on the Mogote (a peninsula in the inner bay of La Paz). He looked lost and a bit disoriented.

I stopped and gave him water out of my water bottle, and he drank the whole 40 oz container. I could see that he wasn’t a street dog or one that had been dumped way out here to fend for himself. There were campers in the area so I thought he might belong to one of them. I debated, should I take him or leave him? I decided to leave him thinking he might belong to one of the campers. It weighed on my mind throughout the day as we processed 60 dogs and cats at the clinic.

I stopped for food on the way home, still thinking about him and hoping he was safe. When I gave him water that morning, I noticed a rabies tag, so I assumed he was from the US. I looked for him again on the drive home but didn’t see him. I vowed I would go out in the morning to see if I could get him to come to me and find out who owned this beauty.

I drove out loaded with more food, water, and some yummy treats to attract the Husky. The guard at the shack saw him but he bolted towards the beach. I hiked the dunes but no sighting, so decided to try again in a couple of hours. Two cars I stopped had seen him and showed me on the map. He was across the road from where I had first seen him, lying under a cactus looking hungry, thirsty, and sad. Probably right where he last saw his owner.

I grabbed my treats and water and slowly approached him. I sat down at his eye level and offered treats. He took a chance and came closer. As he kept taking treats, I was able to gently grab his collar, snap on a leash. It didn’t take too much convincing to get him into the car, he sensed that he could trust me, and he was so tired of running from strangers and walking aimlessly trying to find his family.

This was no stray, he had a story, and I was determined to find out what it was.

First thing, I took him to our volunteer vet Dra. Rebeca Kobelkowsky for a checkup and most importantly to see if he had a microchip. Yay, success, he had one. I called the Petlink number to see who he belonged to. Since we are in Mexico and have a registered 501(c)(3) non-profit in the US, we were able to obtain owner contact information. Obviously, they were here in Baja and got separated from their dog.

We made the call and found out that the owner was on a boat and would be back in La Paz on Friday. Her sister was driving Chopper down from the states. They had stopped for some beach time and the dog got away from her. She was frantic but had to leave to get to the boat. That must have been the worst feeling in the world. 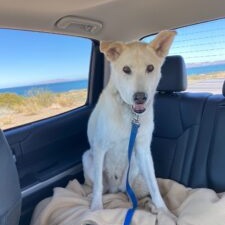 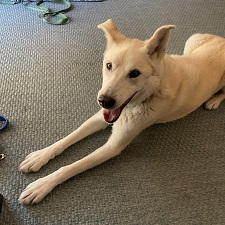 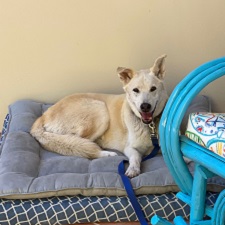 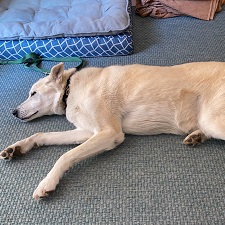 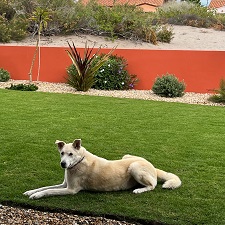 Chopper, we learned was 13 years old and a retired sled dog from Alaska. The owner was so relieved, she didn’t think she would ever see “her old man” again. The reunion was of course tearful and joyous at the same time. Chopper was clearly overjoyed to see his family. We presented Chopper’s family with some new dog tags with his name and their contact information on them.

Right now, there are only a few places that have a chip reader in La Paz so we highly recommend that your pets have a collar and a tag with their name and your phone number on it so people can reach you if they find your dog.

This was a time when micro-chipping was so worth the investment. It saved this old boy from a sad ending.

Contact Amigos de 4 Patas Store to arrange an appointment to get your pets microchipped today. https://www.facebook.com/Hope4LaPawz

Save a life! Donate in the currency of your choice:

Here are some other ways you can support us and they are all free:

Thank you for your support!!

We use cookies on our website to give you the most relevant experience by remembering your preferences and repeat visits. By clicking “Accept All”, you consent to the use of ALL the cookies. However, you may visit "Cookie Settings" to provide a controlled consent.
Cookie SettingsAccept All
Manage consent

This website uses cookies to improve your experience while you navigate through the website. Out of these, the cookies that are categorized as necessary are stored on your browser as they are essential for the working of basic functionalities of the website. We also use third-party cookies that help us analyze and understand how you use this website. These cookies will be stored in your browser only with your consent. You also have the option to opt-out of these cookies. But opting out of some of these cookies may affect your browsing experience.
Necessary Always Enabled
Necessary cookies are absolutely essential for the website to function properly. These cookies ensure basic functionalities and security features of the website, anonymously.
Functional
Functional cookies help to perform certain functionalities like sharing the content of the website on social media platforms, collect feedbacks, and other third-party features.
Performance
Performance cookies are used to understand and analyze the key performance indexes of the website which helps in delivering a better user experience for the visitors.
Analytics
Analytical cookies are used to understand how visitors interact with the website. These cookies help provide information on metrics the number of visitors, bounce rate, traffic source, etc.
Advertisement
Advertisement cookies are used to provide visitors with relevant ads and marketing campaigns. These cookies track visitors across websites and collect information to provide customized ads.
Others
Other uncategorized cookies are those that are being analyzed and have not been classified into a category as yet.
SAVE & ACCEPT